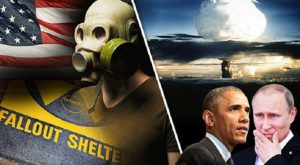 America is preparing for a nuclear conflict with Russia as the government recently secretly raised the DEFCON alert in preparation for World War 3.

According to experts, a nuclear conflict with Russia is inevitable, as the DEFCON alert level being raised to number 3 is a serious indication of impending doom.

DEFCON is an alert system used by the US military that has 5 different levels, with level 1 being the most critical. The last time the alert level was raised as high as this was on September 11, 2001.

Now website DEFCON warning system claim it has been upgraded again in a terrifying revelation – and could be a sign nuclear war with the US is imminent.

While there are currently no imminent threats to the US, it claimed the situation is “fluid and can change rapidly.”

However it also highlighted the dying relationship between the US and Russia, citing concerns of all-out warfare between the bitter rivals.

A statement posted on its website read: “Tensions between Russia and the United States have reached levels beyond the cold war in the recent week.

“The situation between Russia and the United States is extremely fluid at the moment. In all likelihood as dynamic as at times during the Cuban Missile Crisis of 1962.

“At this time, the DEFCON Warning System feels that an increase to DEFCON 3 would be a prudent move.”

Russian citizens have been encouraged to find bomb shelters and gas masks today, as state-sponsored infomercials on television gave out guidelines on how people should prepare for a nuclear attack.

President Vladimir Putin meanwhile has ordered the evacuation of 40 million people in a military drill.

He also transferred nuclear-capable Iskander ballistic missiles to one of its strategic Baltic regions last week, in what officials claim was part of regular military manoeuvres.

However many world leaders fear the moves are being carried out in preparation for war.

The conspiracy theory site warned citizens to prepare for any potential conflict, saying: “This is a very sensitive situation which has the potential to spiral out of control.

“It is recommended that all citizens learn the steps to be taken in the event of nuclear war.”

Theorists have even claimed a move to DEFCON 2 is being muted, based on Putin’s call for Russians to return home.

Though the threat of war seems to be rising, the DEFCON level indication reported by the website is only speculation.

The US military do not share the actual DEFCON status with the public for obvious security reasons.