My latest Revelation Of Hell and the Spirit World 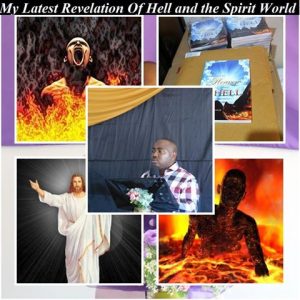 This is how it all began.

In the afternoon around 3pm, as I was within the living room, I felt a bit tired and weak in my body, so I went to the bedroom to rest and relax.

As I was on the bed, I felt a sensation of my spirit about to separate from my body. As I was there, I was battling this on my mind; where my spirit was trying to leave to.

I saw my spirit flying under the skies, seeing stars and clouds. It was so clear and real, I thought to myself “Unbelievable”, It caught me by surprise, that while I was still battling the issue on my mind, I was already out into the spirit world.

Suddenly, I felt angelic presence; I saw something amazing in the atmosphere. There were words that were golden and glorious, they kept appearing, exploding, new ones coming, It was like flashing words. When they did, it became more and more beautiful, I felt more and more invisible angels. The atmosphere was lit and magnificent.

Then I was taken away from there.  I saw myself flying into different parts of Africa and seeing different things.

The first place, I was taken to, I saw a place full of kids around 8-11 years old. These children were practicing witchcraft and the occult, they were dressed in attire of darkness and they were dancing to evil spirits, invoking the demonic spirits. They were strange objects and concoctions.

Then I was taken to a second place. I saw young men and mature men; they were dressed in traditional clothes, they were in a circle. They were kneeling and worshiping satan. In the middle of them, the devil appeared as a spirit.

I was then taken to a third place; in this place, I saw people doing ritual killings. I saw how kids and women were captured and killed for purposes of rituals. There was strong spirits of killing in that area.

I was taken to another place, I saw pastors and Christians. Many of them were caught in sexual sins, fornication, adultery and sex sins. Many committed these sins in the secret, but I saw how people found out about these acts. Some were caught red handed. There were strong spirits of immorality and lust in this area.

As I was looking at the scenery, I heard the voice of the LORD speak from heaven.

He said, ”I am about to expose sin in My House, these people who are committing these sins in secret. The world will soon know what they are doing, save they repent.  Tell them exposure is coming. My children shall fear when they see the judgement I bring to My House and many shall turn away from sin.“

Instantly, I was translated to hell.  That is the worst place ever.

Where I was, I saw a big round container, shaped like a large pot but made of strong rock. I saw smoke rising out of it. I saw what looked like liquid fire overflowing. The fire was overflowing and spilling out from the pot to the outside and even on the ground. When I looked at the ground, I saw some small pits and fire was burning. These pits contained souls and they burned continually. The flames in the pits kept burning without going out.

So I was beside this big ‘Pot’ overflowing with fire; the scene looked like a huge volcanic eruption, I started feeling unbelievable heat, It started at my legs, I tried to bend over, to cover my knees, then the fire went up my body and to my face. I was there in my spirit body, but it was so unbelievably hot.

The more the demons stirred the pot, the more fire kept pouring out and becoming more red hot. I felt my whole body overwhelmed by this kind of heat, I kept wondering how someone could feel this kind of heat even though he is not in the flames or pits or the pot.

I saw about two large, evil creatures, I knew they were demons. They were black, they had features of humans and animals, very ugly creatures, they had a soul with them. It was a young man. I saw the demons throw the soul of the young man inside the burning pot. I heard his loud screams while he was burning. The demons laughed and laughed. They kept stirring the pot, they seemed glad the more the soul screamed in pain.

As hot as it was where I was, I knew that inside the boiling pot, it was so much worse and terrible. As I was about to scream in panic and fear, because I felt I would disintegrate because of the heat,  Jesus showed up. He appeared just about a meter from where I was.

The Lord wore a purest white robe, Majestic and full of compassion. He held my right hand and we went about in that place, all the way to the gate. I somehow knew the direction we took, would eventually lead us to the gate and the outside. He showed me several things as we walked.

In hell it’s so dark, beyond any kind of darkness/night we may experience on the earth, but for me, for some unknown reason, I could see activities that were happening around us.

Jesus and I walked; He showed me many lost souls suffering in the torments of hell.

We saw that the whole of hell is so dark, it is also beyond the word ‘polluted’ – garbage, waste, the worst kind of smell was there, everything unimaginable, evil was there.

We saw the lost souls in the pits; the pits were some meters deep in the ground. These pits seemed to contain a soul per pit, people were screaming from within it, we heard the voices of men, women and children. Jesus showed me, they were there for different kinds of sins and iniquity.

There were souls in that place, because of the occult, disobedience, ritual killings and sexual immorality. Many souls there were unbelievers. They never accepted Christ into their lives and lived for Him. Others were backslidden Christians and believers who died in their unrepentant sins.

We passed a place, where flames leaped out of the ground, burning the victims.

We turned towards the east area where we were and looked. Enclosed from above, we saw what looked like cells; the place was made of strong mortar, rough stones and rock, with iron bars.

We passed there, souls there in the cells. We saw demons, some inside the cells, tormenting the souls who were already suffering in the fire; at other cells, we saw demons standing at the entrances of the cells talking to other demons. Jesus didn’t explain anything to me about that.

The way the people in hell looked was like they were not human looking any more, but disfigured, and burnt skeletons.

We saw all types of demons and evil spirits.

We saw big ones, small ones and regular ones. Demons varied greatly, yet they were all evil, hideous looking and cruel creatures. I saw demons that looked like large bears, they were covered with fur, but they spoke like men. Some looked like small monkeys.

As we neared the gate of hell; we saw demons standing in attention mode; they were ready to be sent to the earth on different parts, to bring all kinds of destruction to mankind. It seemed like others were already sent to the earth.

As we stood at the outside of the gate, Jesus held my two hands and looked at my face. There was a sense of urgency as He spoke to me.  He said,” Go and warn mankind about this place.”

He continued, “Tell My church to pray earnestly and seek the infilling of My Spirit, so they could overcome sin, the pleasures of the world and the plans of the devil. There is no man who will be able to overcome apart from the strengthening of My Spirit.”

I was shaking at the seriousness of the situation, and what he was relaying, He said to me,”I will keep taking you to this place to show you what is happening here, so you can continue to warn man.”

I knew I would keep coming to hell, to see many places and people and the horrors of that place.

Then Jesus’ voice became even more firm and serious. He said,” I want you to watch and be vigilant; keep proclaiming what I show you and take care of yourself. I want you to keep walking with Me in holiness and obedience until the last day.”

When he mentioned the ‘last day’, I had a sense that His coming is very, very soon.

Looking at the tenderness in His eyes, I knew He could see right through me and everything about me He knew. I knew, no man would be able to stand before Jesus and hide anything, yet I could sense unconditional love and compassion for me and humanity.

There at that gate, shaking and shivering, with mournful words, I promised the LORD I would keep sounding the alarm and I will obey until the last day.

Looking a bit to our left, I saw a demon about 6 feet, licking his mouth and seemed he was hearing our conversation. I knew when I left that place, that demon would follow me up. Now I knew why Jesus said I must take care of myself.

I looked up and suddenly I was back in my body.

I started feeling the presence of God so much all over me.

People, Hell is a real place. It is a place of sufferings. Please, come to Jesus today. Accept Him as your Lord and Saviour. Live for Him in holiness. Go to church and WATCH for His coming.

1 Peter 4:17: “For the time is come that judgement must begin at the house of God: and if it first begin at us, what shall the end be of them that obey not the gospel of God?”

Proverb:28:13: “He that covereth his sins shall not prosper: but whoso confesseth and forsaketh them shall have mercy.”

1Corinthians 10:8:” Neither let us commit fornication, as some of them committed, and fell in one day three and twenty thousand.”

Revelation 21:8: “But the fearful, and unbelieving, and the abominable, and murderers, and whoremongers, and sorcerers, and idolaters, and all liars, shall have their part in the lake which burneth with fire and brimstone: which is the second death.”

Romans 6:23: “For the wages of sin is death; but the gift of God is eternal life through Jesus Christ our Lord.”