We thanked the Lord for a short period of rest when one night, I was once again permitted to participate in yet another diabolical experience. Strolling along, I noticed that the residents of a certain place were in severe poverty. Suddenly, the gift of discernment started to operate, when a presence not visible to my eyes manifested.

Without thought of how to handle this type of presence, the Lord allowed my Spirit ears to open. To my amazement, what I could hear in a different realm actually manifested, and in this way, my Spirit eyes were opened to see what was beyond what I am unable to describe.

My Spirit ears were actually given the ability to help my spiritual eyes to see many evil forms. So the sounds of their footsteps picked up by my Spirit ears could be manifested before my Spirit eyes.

By pure Spirit revelation, I was able to hear and see an untold number of venomous spirits. The resemblance of their movements was like airwaves and currents. Through this transformation, vicious circles were formed around me. 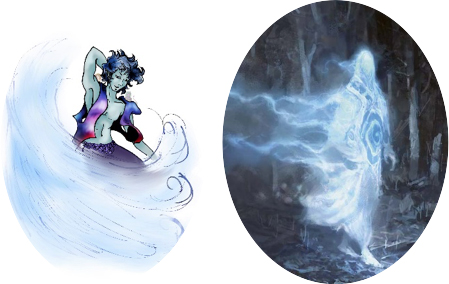 The best description I am able to make known is to combine these 4 illustrations into one image and multiply it a thousand times.

Not knowing what to expect, I was given the ability to study how their forms moved. I was shocked that I could actually see these spirit forms, like wind and airwaves, moving like air currents. Why was I allowed to experience the inexplicable, the impossible for any human mind to understand?

Yet my Spirit knew that what was before me was more than just real. I was in the midst of frightful looking creatures that took on the appearance of humans.

So these are actually demons masquerading, camouflaging and choking the airwaves with their abilities to transform currents of elements and airwaves into frequencies.

At this point, I may not be able to use the correct words to describe the manifestation of this type of dark matter.

But what happened next, whether in the body or out of the body, I cannot tell. I was instantaneously and spiritually transformed with exceptional abilities.

I became the fearless, fully trained warrior with the ability to fight this type of deadly battle.

So is that the secret answer to our intense electromagnetic frequency torment and sufferings? Are we to face this?

I looked at the many, many frightful forms – how many I do not know, but none could come close to me. These had the ability to create paranormal, demonic frequencies.

Meanwhile, mom was in earnest prayer, “Father, Your Word declares, ‘The reason the Son of God was made manifest was to undo the works of the devil.’ Yeshua, Emmanuel, You are Heaven’s Power and Strategy. You had defeated every past, present and all future evil strategies that Satan could or would ever be able to imagine. All-Powerful, Almighty and Majestic Captain of The Hosts whom Satan and his kingdom fears.

That night, I had switched off the bedroom light and was about to doze off when the atmosphere shifted and changed. The very presence of these entities suffocated and smothered every bit of air so that I could not breathe.

Choking and gasping in this, my Spirit knew exactly what had entered. So this is confirmation that they are spiritual wicked rulers of the air, elements, and currents.

Have these ranks of Heaven’s host also become fallen angels? The manifestation of their abilities truly comes out of a higher ranking of spiritual rulers.

This spiritual wickedness had the ability to exhaust every bit of my oxygen so that I was lying with my mouth wide open gasping, desperately calling out to mom.

The moment she rushed into my room and switched on the light, they vanished. Oh, what does this tell the Reader?

When I finally dozed off, I was back in the process of learning at school.

On several occasions, I was back at school, but this time it felt so Majestic, so Heavenly with an awe-inspiring Presence that caused my Spirit to swell into Divine utterances of words – a song I never knew, yet I have always known it. As Divine words flowed forth from the depth of my innermost being, I saw Glory illuminating out of me.

“Who will transform and fashion anew the body of our humiliation to conform to and be like the body of His Glory and Majesty, by exerting that Power which enables Him even to subject everything to Himself.” Philippians 3: 21

Yet spiritual warfare continued the more, not to mention that EMF turned torturous. In this, I was given Spirit revelation in which the adversary entered. While trying to rape me, he overheard mom saying that an intruder had trespassed. Shocked, he fled, but nonetheless, a demon whose appearance was invisible was assigned to wrestle and combat us.

This strategy was plotted especially during the wee hours of the morning. Mom had opened her eyes, all bruised and thought that her hip bones were splintered. So these evil spirits are causing the EMF to intensify together with steel grips like iron bands.

In my desperation, seeing the situation I was given, finally, not only the intruder fled, but the demon accompanying him was cast out altogether.

Yet in another Spirit revelation, as I was about to close my eyes, a deep slumber instantly came over me. Immediately, I was transported to Cape Town. While pondering the purpose of this mission, it began to unfold before my eyes.

My attention was drawn to the surrounding seas when suddenly there appeared an evil being which caught my attention. While observing its unusual human-like appearance, something so terrible boggled my mind.

This wicked form began uncoiling itself into a deadly weapon. Shocked that everyone present was not aware of the presence of the destroyer, I watched as each moment turned even uglier and began intensifying with mind-blowing manifestations.

This powerful spiritual wickedness of the marine realm began stirring up the waters, seething inwardly.

In the spirit realm, it was altogether boiling with rage.  This thing was swirling uncontrollable, enormous amounts of water towards the land.

Reader, are you aware of what is happening in the other realms?

Thereafter, I was transported along a different coastline where I was to witness the same chaotic devastation in the spirit realm long before it manifested in the physical realm. I knew that this would have a great impact in the place we live.

View all posts by admin →