Source: This Shark has saws in his mouth, so is almost as fierce as Megalodon

Regardless of whether it is text data or movie pictures, Megalodon gives the impression that it is super huge. But before Megalodon, the evolution of the shark family members was how weird they could be, how weird they were. The most weird of these is the spiral tooth shark . For 100 years, scientists have no idea what its shape looks like. 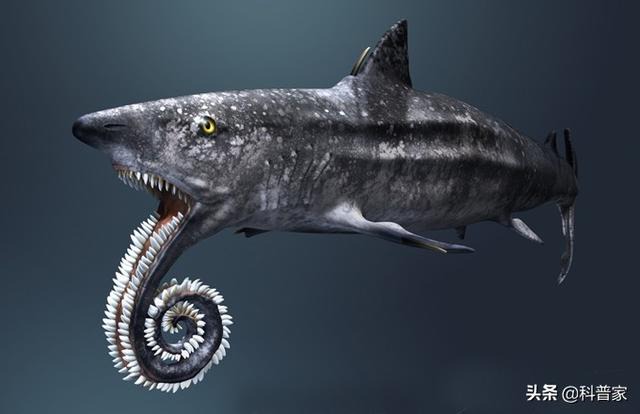 The strangest “shark”, with teeth like a circular saw, is simply a monster!

Rotary tooth shark (Helicoprion), as the name suggests, its teeth as a rotating circular saw-like, now organized into Chondrichthyes – elasmobranchii – rotary tooth shark families living in 275 million years ago (Permian to Triassic Ji) in the ancient ocean. Its body length is 7 to 12 meters, and its body is narrower than that of modern great white sharks.

The spiral tooth shark’s fossil was first discovered in 1899 and is a Russian paleontologist Alexander Karpinsky. He found a spiral tooth fossil on the Ural Mountain that year. But he didn’t know where the tooth was supposed to grow. In the end, he thought it was an unidentified creature with spiral teeth in the upper jaw, named “Helicoprion”.

Until 1907, similar fossils were also found in Idaho, the United States. What kind of creature is it? After all, modern sharks will lose their old teeth and grow new ones, and the fossil teeth are arranged in a rotating arrangement, so many biologists do not associate it with sharks. But American paleontologist Oliver Perry Hay opened the brain hole after seeing the fossil shape, thinking it belongs to a prehistoric shark.

Later, such spiral-tooth fossils were found in many countries and regions. Among them, the largest number of fossils were found in Idaho in the United States and the Ural Mountains in Russia. So far, more than 150 spiral tooth fossils have been found in the world (the University of Edward’s Natural History Museum in the United States has collected the largest spiral tooth shark fossils in the world, with a diameter of 23 cm and a total of 117 teeth). After research, most of the sites unearthed from the fossils were the Tethys Ocean in ancient times, so the academic circles recognized it as a prehistoric shark.

How long are the teeth of this product? Hundreds of years have puzzled scientists!

Well, the identity of the fossil species is determined. So where does this tooth grow? How does it work? Scientists began to argue again. One is that the teeth should grow in the upper jaw, acting as a defense, because the growth in the lower jaw will prevent eating; the other is that the lower jaw curls down into a spiral shape, and the teeth are densely packed, preying like a whip during predation; growing On the dorsal fin, on the tail, on the nose … various theories vary.

Until 2013, scientists found that the fossils excavated in 1950 also had cartilage attached to them. After CAT scanning technology and computer 3D modeling, it was determined that the spiral teeth grew on the inside of the lower jaw , like a human tongue. Thus, the tooth debate over spiral tooth sharks came to an end.

The bite force is one third of that of the great white shark.

Simulations show that the jaw opening angle of the spiral tooth shark can reach 90 °, far exceeding 60 ° of the great white shark. However, although the opening angle is large, due to dental reasons, its bite force is not as good as that of modern great white sharks (about 30%), which is closer to modern crocodile. When hunting, it opened its mouth wide and attacked, biting the prey with teeth tilted backwards in the middle. When the jaw was closed tightly, the prey was sent into a notch of the upper jaw by spiral teeth, and then cut into two halves. Into.

In view of the fact that the teeth of the spiral tooth shark rarely break or wear, scientists speculate that the spiral tooth shark mainly feeds on fish, cephalopods, such as squid and octopus. And if it finds chrysanthemum or nautilus, its teeth are like “eating snail’s knife” (), biting the chrysanthemum shell and tearing off the meat. Scientists describe this predation effect as a mollusk shelling system, which can be called a professional “bursting chrysanthemum” predator.

Judging from the equipment of the spiral tooth shark, its weapon has only one spiral tooth, and it does not have too strong defensive armor. But the spiral-toothed shark was very lucky. It escaped the Permian mass extinction, and once became the master of the ocean, dominating the ocean for 8 million years . Later, it may be because the earth was tired of the weird shape of the spiral tooth shark, and waved it to kill it (mainly due to extreme specialization, due to the sharp decrease in the number of chrysanthemums, and gradually went extinct), leaving a spiral tooth fossil, Let the human brain make up its image.